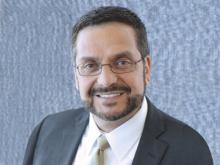 Miguel has also worked for two private law firms (Cooley LLP and Remcho, Johansen & Purcell), and as a Management Consultant at KPMG Peat Marwick, where he was part of a national financial and organizational consulting practice.

Miguel’s parents immigrated to the United States from México with only a limited amount of formal education. Spanish was Miguel’s first language, so programs like Head Start were critical to his early education. These formative experiences inspired his commitment to public service.